Home » Life as Mom » How a Cookie Broke My Heart I knew the time would come, that this would happen, that somehow food would cause a problem with my daughter. I just wish it wasn’t so soon. 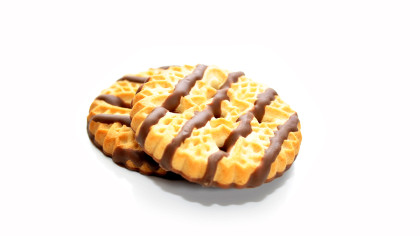 I usually have plenty of gluten-free, organic snacks in my purse at any given time just in case we’re out somewhere and we need a snack. But on this day I wasn’t prepared. We went to a play date in the morning and we’d had a late breakfast and I knew we’d be back home by lunchtime so I didn’t think I’d need one. But one of the kids asked for cookies. The mom hosting the play date was quick to offer cookies to all the kids in her home, as any mom would when a child asks for a snack. Who wouldn’t? And there they came, the cookies with the chocolate fudge drizzled over them when Annabelle was offered one I was quick to decline – gluten intolerance.

Annabelle melted into my lap and I promised to take her straight to Whole Foods to get her a chocolate macaroon that she loves. She got kind of quiet and when we got in the car and I asked her what was wrong one of the things I’ve been hoping wouldn’t happen finally happened. She was crying because she just wanted a cookie that everyone else was having. And there began my heartbreak.

So on the way to stock up on so many cookies we talked about food for about the millionth time and we struck a deal. First from now on I’ll ALWAYS have something in my purse (I hope!) and then if she really, really wants to try something she just has to say something and she can go ahead and try something but remember that the gluten might make her tummy hurt.

Funnily enough she woke up a few days later and said that she was dreaming about “that gluten cookie that was at that house”. Sigh.

A few days later she went to a meet and greet at her preschool where they provide school lunch for the kids but Annabelle takes her own food because they do a ton of grains in the form of bread and pasta for lunch and snacks (she’s gluten free because she gets eczema and digestive upset from gluten) and because I’d much rather prepare her food with organic ingredients since I have the time to do it.

I made her the same food I knew would be served, a chicken wrap, but she got beet chips and strawberries with it instead of watermelon like the other kids (which she usually spits out when I give her). When I picked her up she said she wanted watermelon next time like the other kids. Once we started talking about the lunch we got on to talk about food allergies and how she’s not the only kid who can’t eat some foods. I made a big deal out of how some kids can’t eat dairy and her favorite food, cheese, made her feel a little better.

It makes me sad that the quality of our food is so poor and filled with pesticides, chemicals, toxins and GMO’s that I feel bringing our own food in a non-negotiable. I wish organic, fresh food was the norm and served in schools for all kids. At the end of the day, I know that when she gets a little older she’ll understand and since I know I provide her with the very best as often as I can I’ll try to make some exceptions if she really wants to try something – like a piece of salt water taffy the last time we went to the coast. Until then it’ll probably give her a thicker skin. I hope.